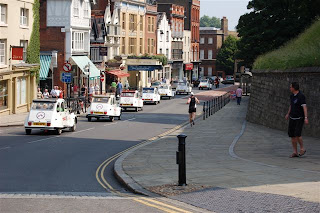 All 7 2CVs, the support vehicle and a motorcycle outrider arrived outside Windsor Castle, parking behind the statue of Queen Victoria, for a photo shoot today.

The photographer arranged with the police to let us stay for 15 minutes whilst the tourists looked on in an interested but somewhat bemused state. Lots of pictures and a press interview later and we drove off to the park by the river. (Well nearly all of us did - the "Marlow Donkey" needed a bump start outside the Castle which was the first sign of things to come).

We all parked up near the river under the railway arches and took lots more pictures. The plan was then to head off to Windsor Great Park, but this is where we ran into real trouble. The "Marlow Donkey" had decided that it was definitely not going to start again, even after trying to bump start it half way back to central Windsor! So the "Support Team" was summoned and a shiny new "A" frame towing bar fitted to the front of the tired 2CV to take her home.

Everything under control again we headed out of the car park when the "Mangy Moose" decided to come out in sympathy and stalled. Again she stubbornly wouldn't start until connected to jump leads from the Support Vehicle.

We made it to a roundabout on the Windsor by-pass when the "Mangy Moose" battery decided it had had enough and was going no further. This was a pity as the day before it had been driving round farmers fields at great speed, becoming airborne at one point, and delighting pilots and children at a party at Hickenham Farm.

So now we had two dead cars and one towing vehicle. After cooling down (the coil had over-heated), we managed to revive "Marlow Donkey" just enough to get it on its way and so attached the A-frame to the "Mangy Moose" for its recovery home.

An interesting morning and we haven't been past Windsor yet. It looks like the support teams will be quite busy on the trip !

After a full days battery charge the Mangy Moose sprung back into life starting first time.