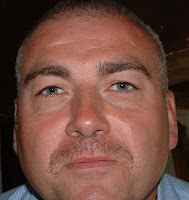 The Mangy Moose (Ian Brown) thought it would be nice to give Boîte de Peu (Richard) some company in looking like a dodgy second hand car salesman so the race is on for the best looking tache by the end of the tour.

Ian says "So far I have sponsorship of two weeks pocket money from my daughter Kezia. In trying to make the growth look more substantial I have cut my hair as short as I dare, but all that has happened is that my wife Lucy thinks that I look like something out of the Village People and has refused to kiss me until it either dies or falls off. Any other sponsorship directed at the Mangy Moose (or should that be Mangy Tache) would be gratefully received."
Posted by Mark Iwaszko at 14:12

Young man, there's no need to feel down! I said young man, get yourself off the ground!
Kiss kiss.