Rosbifs row for the Air Ambulance 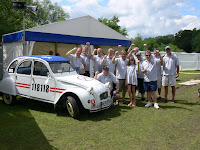 A team of 2CV pilots and supporters of the Air Ambulance took to the water to enter in the Marlow Town Regatta Dragon Boat competition.

The imaginatively named "Fit, Active, Rowers, Toiling for the Air Ambulance" (or F.A.R.T. for the A.A. for short) were one of 39 Dragon boat teams competing on the day.

The "FARTftAA" won their first 3 races with some very impressive times. Unfortunately however, the team seems to have peeked too early and were eventually beaten by a more seasoned dragon boat. Even with a respectable 15th place overall some of the pilots felt they had done better and a stewards enquiry is in progress !

Collecting buckets for the Air Ambulance were rattled all day with many generous donations received. Also a big thank you to Marlow Town Regatta for letting us collect money as people left after the pop concert and also http://www.marlowrt.co.uk/ for the collecting tins on the bars.