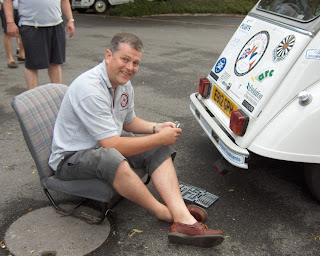 Reporting at 23:45 from a bar in Chateauneuf.

Slightly better morning today as the 10am start time meant that all the Rosbifs were awake before we set off. Several pilots, namely Ian, Mark, Allan (token Rosbif), Nick and Richard ran around Fontainebleau (4 miles) in 118 T shirts (excellent additional publicity for our major sponsor). The 118 runners ran in Abbeville on Sunday morning and will be running every morning of the trip.
As the 2CVs assembled the “Marlow Donkey” managed to reverse over its own reversing light meaning that it needed to be removed before we departed. David insisted on a comfy seat to facilitate the repair and removed one of his seats. This took 20 minutes to take out and 30 minutes to put back but hey, David needs his creature comforts when away from home!
Running repairs completed we left the hotel car park in convoy being filmed by the French TV crew we had met the previous evening.
After 800m we approached the first roundabout where all the cars preceded straight across except, inexplicably the “Duke of Cambridge” which turned left! One of the motorbikes tooted frantically to the as they disappeared into the distance. 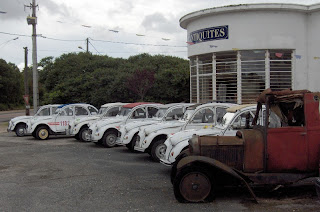 The support vehicle set off to find a supermarket to buy a picnic lunch and the rest of the cars headed for a photo shoot in an old Antique garage on the N6, near Saulieu, next to a river and a rusty Citroen truck!
Having expended a lot of energy lining up the cars we stopped for coffee. In true tour form the 2CVs managed to sneak off without the motorcycles noticing and they were left to find their own way to the next meeting place. (Richard claims this was not the way it was intended but you know what bikers are like, easily offended and eager to blame everything on everything else).
As we proceeded South the cars gradually were split up and so we regrouped again at the river in Auxerre overlooked by a huge cathedral. The main reason for to meet there was to take a photo of the bridge, cathedral and Esso garage Richard had seen in his book about the RN7. The bridge and the cathedral were still there but the garage was gone and was replaced with a “modern” Ibis Hotel (as they say in French “that’s life!”)
We then followed 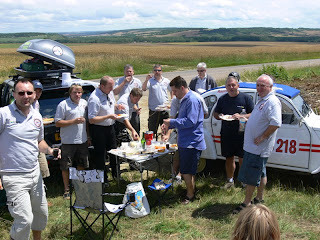 the N6 South to have our picnic. We aimed to stop at a high viewpoint but with nowhere to park we found a farmers track in the middle of a corn field where we parked the 2CVs in a row. An excellent picnic of French bread, ham, cheese, salads and red wine, in fact more food than we had ever seen before, but we finished it all dining from Jeremy’s and Richard’s “tablecloth shirts”. 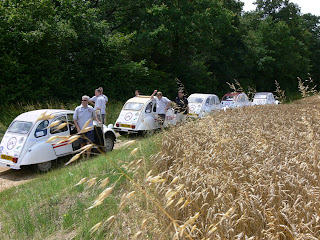 Although slightly cloudy we were really lucky with the weather being able to have a very relaxing lunch after the last few hectic days.

With another 60km along the N6 to Chateauneuf, some of the cars decided to turn the tour into a rally with a race to the hotel.
The race was started by a tasty manoeuvre by the Mangy Moose, unseen in previous competitions but now a serious competitor to Aly, the Citroen Tarte and the day two champions - Boite de Peu - expertly piloted by Robert and Richard. [ed. this paragraph written by Richard who "thinks" he is an expert Pilot!]
After much weaving and diving the Boite took the lead having previously removed the Moose’s petrol cap, returned the cap in a high speed handover, forcing them to stop and refit the said component. With Le Boite now well in the lead the pilots decided to hide for a while and rejoin the race in fourth place in order to add some spice to the race.
Chasing from behind Le Boite caught overtook Aly with ease and caught up with the Moose and overtook to take first place. A missed turning caused Le Boite to lose her place and again she fell to fourth place. Making up time again to reach second place and attaching herself to the Moose bumper the two chased at break neck speed (55mph) up the hill to the Chateau. The Moose won the day with a 1 second lead at the final winning flag. Congratulations to the Moose, more tomorrow. 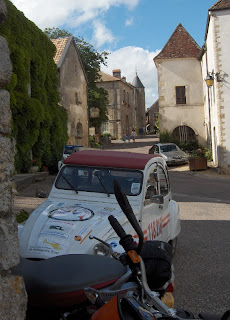 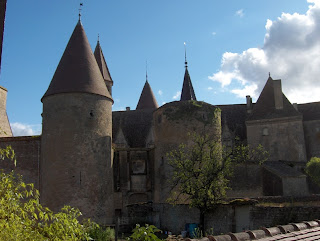 message for Mark,
I think it was you who said that you had found a web site where a company cuts up 2cv's to turn into garden furniture. I would be EXTREMELY interested in having the address when you have a minute.
Thanks Mark.

So we have a "Sleepy" Rosbif, a "Dopey" Rosbif who managed to run over his own reversing light, "Grumpy" motorcyclists who got left behind at the pit stop and "Happy" Rosbifs in the Moose that won the race. Just need "Bashful", "Doc" and "Sneezy" to complete the set!

If you've ever heard Ian getting going, I think you'll have found your Sneezy!

Sounds like you're all having a fantastic time. From the sound of the food, the Snails are going to be under increasing strain from expanding Rosbifs as the week goes on.

Ian - look after the Moose - her prospective purchaser won't be happy to hear about yesterday's exploits....

Note to Hudders.... I have so posted that picture of you on my myspace and all my friends now think you are a bit of a legend. Getting cooler by the minute Dad!
Miss you like a fat kid misses their cake when its in the oven! If that made any sense at all!
Love you a bit much!
Beci xx

I think it is really sweet that you want to create a memorial in your garden from the 2CV tour!